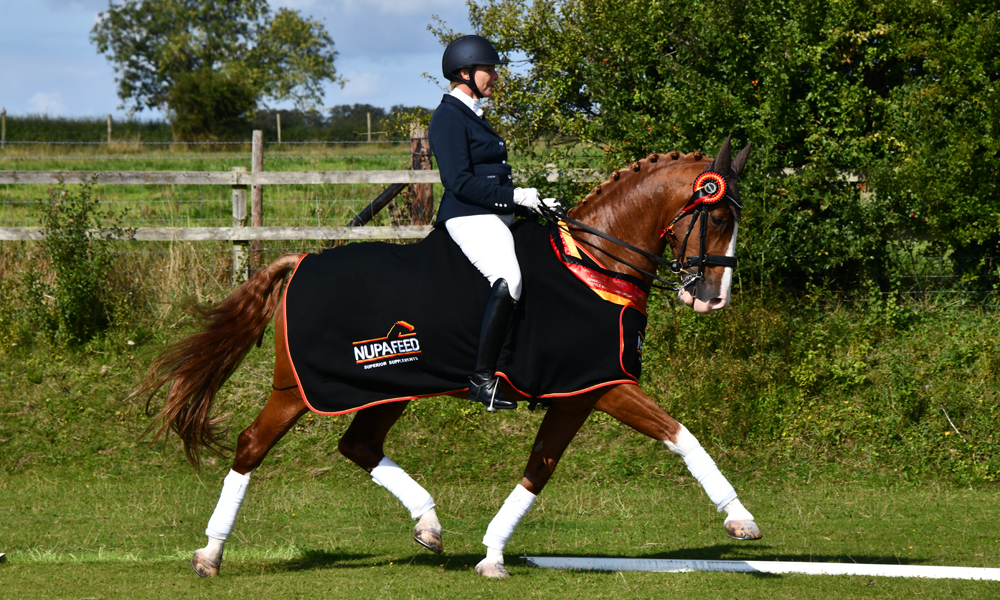 As with so many things this year, the British Dressage Winter Championships didn’t quite go to plan and its usual April slot had to be cancelled due to COVID distancing requirements. Luckily, the Regional qualifications had been completed and, thanks to the hard work of British Dressage, we were able to see the Championships run behind closed doors in August.

The Nupafeed Advanced Medium Freestyle Gold Champion was Alice Oppenheimer and homebred, Headmore Bella Ruby; nearly 3% clear of the rest with 76.28%. Probably the favourites going in, Alice seems to have made our class something of a speciality, this being her fourth victory since we began sponsorship (previous winners; Wurlizer – 2009, Tantoni Sir Soccrates – 2015 and Headmore Davina – 2018).

“I was so pleased with the overall test and how he carried the energy level. And the music suits him – it’s bold music for a bold horse.” The music being a rock ballad compilation by Gaynor Colbourn.

A further mention has to go to our wonderful ambassador, Dannie Morgan, winner of the Intermediate I Gold Championship with Knoxx’s Figaro, owned by Lisa Morgan and David Knoxx. We’re especially fond of ‘Fig’ as he won the Nupafeed Advanced Medium Freestyle Championship in 2019 and is also a Nupafeed MAH® Calmer user. It is great to see Dannie working through the levels with him, what an achievement!

A huge congratulations to all of our winners! Thank you to everyone who competed and to British Dressage for organising a great event despite the trying circumstances.

“I would like to thank Nupafeed for developing a fantastic product. I give the MAH Syringes prior to competition and can honestly say the results are outstanding! Unlike other calmers I don’t lose any performance but have a focused mind […]